We are live! Find us at the NEST at UBC. Here is a quick demo video:

Just in-time for the beginning of the rainy season, Vancouverites can now enjoy hassle-free access to umbrellas at participating locations as part of UmbraCity’s first phase of expansion.

After experiencing tremendous success at The University of British Columbia (UBC) with over 30,000 umbrella rentals, UmbraCity has expanded its umbrella sharing network to downtown Vancouver and is ready to cover Vancouverites on rainy days. This first expansion covers higher density areas within Downtown Vancouver including office buildings, residential buildings, venues, hotels, and retails.

Residents and commuters in Downtown Vancouver can now borrow umbrellas for as low as $1 for 24 hours. As Vancouver’s weather could be unpredictable, UmbraCity provides freedom for the community members to move around the city whenever and wherever without worrying about bringing an umbrella or getting drenched in the rain.

“By partnering with innovative and forward-thinking organizations and properties, we have now launched the initial expansion of our umbrella sharing service to downtown Vancouver with 23 locations and 6,000 umbrellas, and with many more locations to be launched in a short period of time. We will continue to work with properties to offer this service to Vancouver and make it a more walkable city.” said Amir Entezari, founder and CEO of UmbraCity.

“UmbraCity looks forward to keeping Vancouver dry in the coming months and we invite interested properties to reach out and join the network.” said Jamie Pitblado, the Director of Business Development.

For the real-time interactive map of UmbraCity locations and partners, visit http://umbracity.com/cities/vancouver

About UmbraCity: UmbraCity is an umbrella sharing company that allows commuters to borrow a high quality, wind-resistant umbrella when needed and return it at any of UmbraCity’s locations after use. It is an affordable and convenient service provided to increase sustainability and keep people sheltered from the rain as well as removing the burden of carrying an umbrella. The sharing economy offers a convenient amenity to properties without the cost and hassle of handling and tracking umbrellas, while helping the environment by reducing waste created from broken umbrellas and lost umbrellas. UmbraCity is headquartered in Vancouver with plans to expand to other cities and countries in the near future. 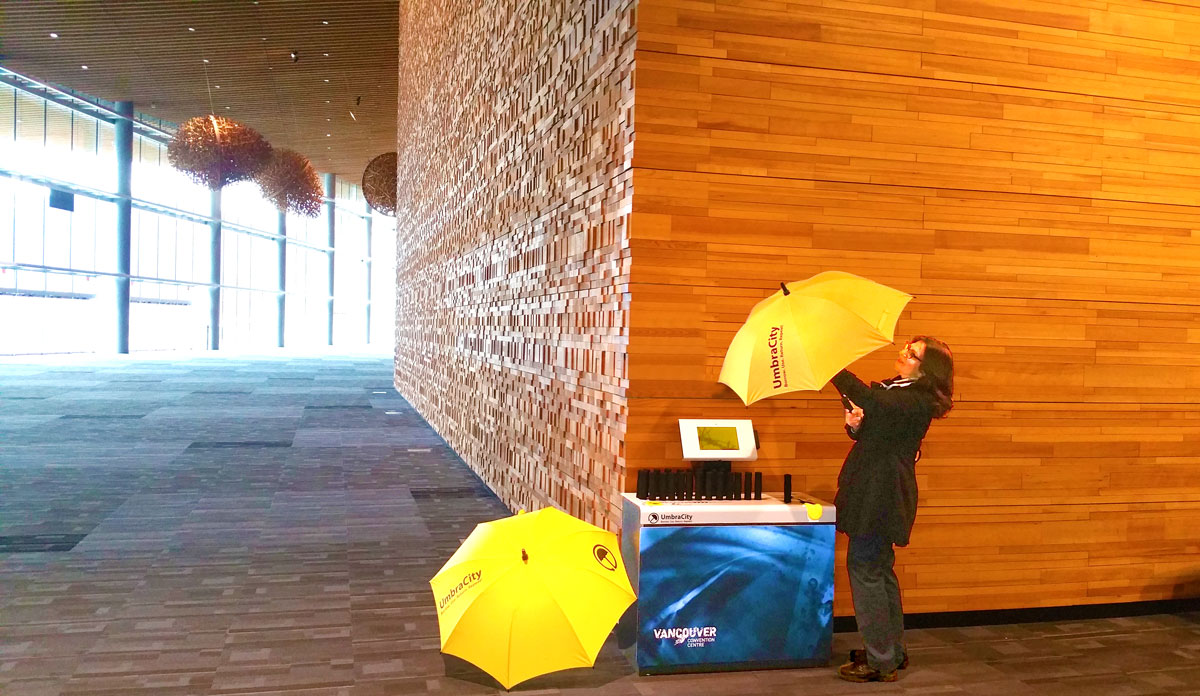 As part of UmbraCity’s expansion of its network of automated umbrella rental service in Downtown Vancouver, the service is now available in multiple locations in the Coal Harbour area, targeting office buildings, event venues, hotels, and tourist locations

In early 2018, UmbraCity started the quest in expansion of its service to cover Vancouverites on rainy days. As Vancouver’s weather could be unpredictable, UmbraCity aims to provide freedom for the community members to move around the city whenever and wherever without worrying about bringing an umbrella or getting drenched in the rain.

As of March 12, 2018, UmbraCity’s umbrella rental kiosks are being trialled at the Vancouver Convention Centre until the summer as an added amenity to its visitors and the community. As British Columbia’s flagship convention centre, the facility hosts more than 550 events and welcomes hundreds of thousands of attendees each year, while generating significant economic activity for the province. With this service, Convention Centre guests will be able to rent an umbrella for $3 for a 24-hour period using a convenient, self-serve kiosk located in both the Burrard and Thurlow entrances of the West building, as well as a kiosk located in the entrance of the East building.

“Since the inception of our umbrella share service, we have always considered the Vancouver Convention Centre as an ideal location given it is one of Vancouver’s most prestigious venues, and it hosts hundreds of thousands of unprepared event-goers on rainy days. We are now ecstatic to partner with this iconic venue to trial our service that could further enhance the experience for guests,” says Amir Entezari, founder of UmbraCity Inc.

UmbraCity continues to grow this service in Downtown Vancouver and invites commercial properties, offices, shopping malls, hotels, and retails in the area to join the network and make the community more livable and vibrant. As a partner of UmbraCity for Business, organizations can offer fully or partially subsidized annual UmbraCity memberships to employees, students or members as a convenient, affordable and green way to get around the city. For the current list of UmbraCity locations and partners, visit http://umbracity.com/cities/vancouver

About UmbraCity: UmbraCity is a new umbrella-share company that allows customers to borrow a high quality, wind-resistant umbrella when needed and return it at any of UmbraCity’s locations after use. It is an affordable and convenient service provided to increase sustainability and keep people sheltered from the rain as well as removing the burden of carrying an umbrella. The sharing economy offers a convenient amenity to properties without the cost and hassle of handling and tracking umbrellas while helping the environment by reducing waste created from broken umbrellas and lost umbrellas. UmbraCity is headquartered in Vancouver with plans to expand to other cities and countries in the near future.

UmbraCity is bringing its umbrella share solution to your rainy days across downtown Vancouver, increasing vibrancy and walkability in the community.

Through a successful roll-out at the University of British Columbia (UBC), UmbraCity has proven the incredibly high demand and its innovative smart technology. After receiving immense positive feedback, UmbraCity has geared up with scalable technology for its first phase of expansion in Vancouver.

UmbraCity is excited to bring smiles on rainy days with thousands of umbrellas and over 20 strategically placed smart umbrella rental kiosks around Vancouver’s most populated locations such as corporate buildings, campuses, and shopping districts. It is currently inviting all businesses in Downtown Vancouver to join UmbraCity in this exciting journey. The addition of kiosks will ease the lives of many through the impeccable convenience it brings to the community, keeping people covered and happy on rainy days. This expansion to Downtown Vancouver will be first of many global expansions in the next few years as UmbraCity plans to provide the world with a simple solution to those inconvenient “rain worries”.

“Umbrellas are often forgotten, broken, or simply a hassle to drag along. Our goal is to ease your frustrations and provide you with a favorable solution on a rainy day. ” Amir Entezari says, founder of UmbraCity Inc. “Our smart and simple technology is going to spread vibrancy and positivity, inviting everyone to join us in the umbrella-sharing economy that is convenient and affordable.”

UmbraCity serves to benefit businesses by offering an attractive amenity and increasing mobility and walk-in traffic on rainy days. Establishments that place a kiosk at their location enable their community members to move around freely with UmbraCity’s reliable umbrella share service. Employees, customers, and the general public can reap the benefits of this low maintenance, convenient solution, whilst contributing to UmbraCity’s sustainability initiative in reducing umbrella waste (learn more).

Host a kiosk at your location and join our network. Drop us an email at host@umbracity.com 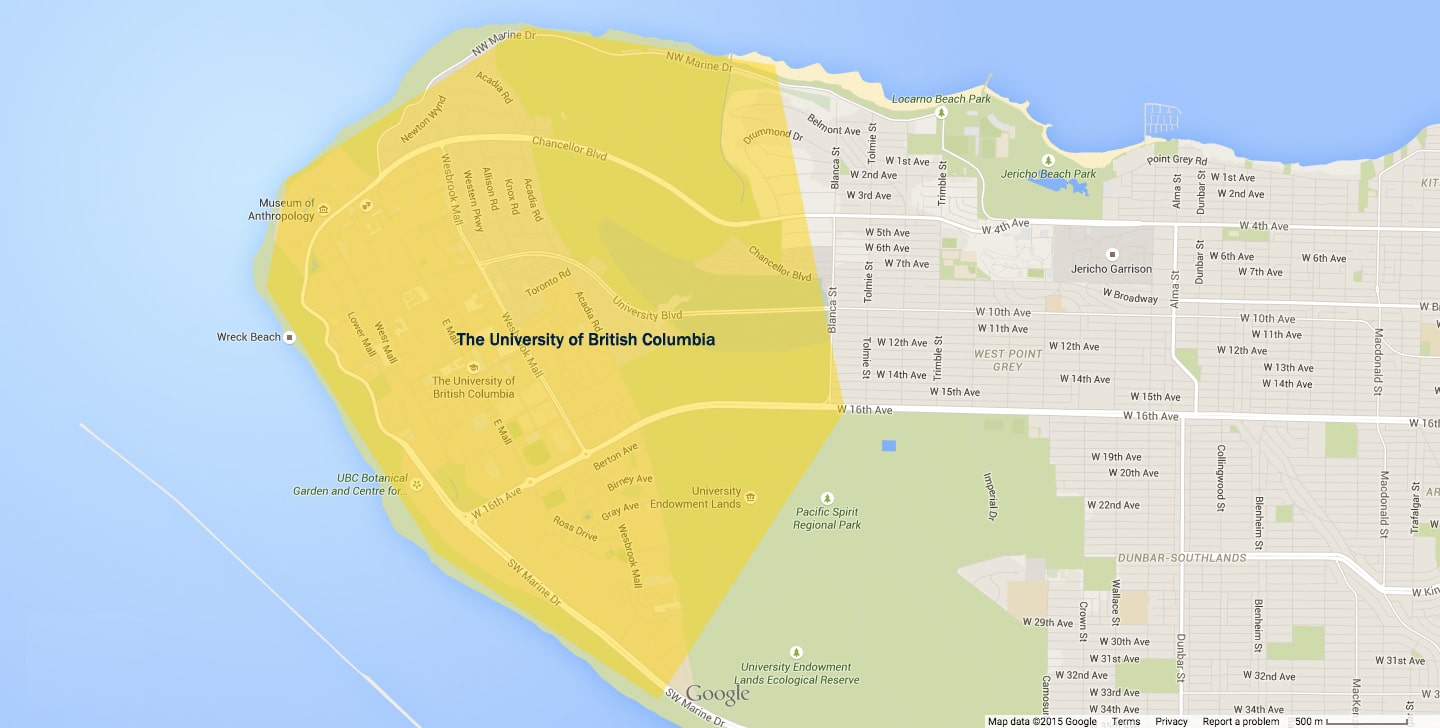 As the unpredictable rain season returns, two Vancouver entrepreneurs have provided a simple yet innovative solution. UmbraCity and the AMS – UBC Vancouver’s Student Society have partnered to bring an umbrella-sharing service to UBC Vancouver Campus. Launched this September, UmbraCity offers automated kiosks that allow users to borrow an umbrella free of charge and drop it off later at any one of the kiosks.

The initiative is not just designed to be a convenience; at the core, this project is about sustainability and encouraging sharing economy. UmbraCity reduces the amount of broken low-quality umbrellas headed for landfill and encourages community-minded actions.

‘The idea came to us on a rainy day when we were outside and we wished for an easy access to an umbrella. This is a common issue for Vancouverites.’ said Amir Entezari, co-founder of UmbraCity and an occasionally-rain-soaked UBC alumnus. ‘We thought some more about the idea, brainstormed with the experts, and validated the solution with real users at UBC campus. It just made sense!’

The UmbraCity umbrellas are lightweight, high quality and very resistant to strong winds. At the end of their lifecycle, the umbrellas are fully recyclable. ‘The bright yellow colour of our umbrellas increase pedestrian visibility on dark gloomy days and simply cheer up a grey rainy day.’ said Babak Asad, the other UmbraCity co-founder and also a UBC alumnus.

Four confirmed locations will be at the AMS Student Nest, the Buchanan Building A, the Fred Kaiser Building and the Forest Sciences Centre and a fifth location is pending finalization. Students, staff, faculty, residents, and visitors will be able to register at any kiosk and gain free access to an umbrella for 48 hours. After the initial 48 hours, if the user wishes to continue using the same umbrella, the registered card will be charged a small daily fee, up to the value of the umbrella. UmbraCity aims to analyse the results of this pilot program and expand its service across the Lower Mainland in the coming year.

For more information about our project, please visit www.umbracity.com

UmbraCity started in the summer of 2013 when a group of friends decided to solve the basic problem of staying dry in rainy Vancouver, Canada. Inspired by many sharing economy systems such as car-share or bike-share programs, the team invented and developed a fully automated rental kiosk that integrates current technologies in ties with the internet-of-things methodology. After many months of hard work and carrying out multiple field tests and focus group studies, the team is excited to launch this product and service for the first time at the University of British Columbia, in partnership with the UBC Alma Mater Society (AMS).

umbraCity is excited to launch its first service at the University of British Columbia in September 2015. umbraCity is a free umbrella sharing service. Say goodbye to the days when you have to carry an umbrella all day for the slight chance of showers later on, or worse, when you are soaked wet outside without an umbrella! With umbraCity, you can have an umbrella whenever you want, wherever you want.

Please visit our website umbracity.com/cities/vancouver to find a kiosk near you at UBC.